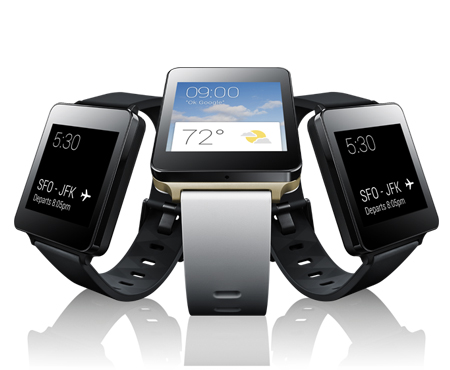 2014 was the year where wearable tech really kicked off! It all started with the launch of Pebble Steel but soon Android Wear took over. Today, I have got the LG G watch with me and here are the Top 5 android wear/LG G watch features.

Voice controls are pretty much the core function of Android Wear. You can call up someone from your contacts using the voice control, send text messages, play music, set reminders, take notes and what not. All the notifcations are shown in the form of a google card. Yes, you can interact with those cards or notifications but you can only perform some basic functions as of now.

Now this is something that I really liked about Android Wear and my LG G watch. It tracks my steps and gives me the option to check how many steps I have walked in the past 7 days. Pretty neat! I know it might not be a big deal for some of you out there but I have really started monitoring my steps all thanks to Android Wear.

I LOVE the watch faces on my LG G Watch. I know this isn’t a big “feature” as such but it really just enhances the whole experience. Instead of asking about the functions of the LG G watch, a lot of my friends just wanted to scroll through the watch faces and basically everyone liked how the smart watch looks with those watch faces on.

This is still a new area for developers but there are already some pretty kick ass apps for Android Wear. One of my favourite one is called “Find my Phone” and it basically helps you find your phone if you have misplaced it somewhere near you. Just launch the app on your watch and it will set off an alarm on your phone, even when it is in silent mode. If you have forgotten your phone somewhere or it’s gone out of range your watch will vibrate and give you a nice little notification asking if you have left your phone somewhere.It’s pretty useful sometimes. There are a bunch of other apps too but honestly I have never used any one of them. Even when I need to navigate somewhere it’s pointless to just launch the app on my watch and then pull out my smartphone. It just feels like an extra step.The other app that I have used sometimes is the Calculator App. Again I could just pull out my smartphone and calculate and that would be easier too considering the small size of the LG G watch but sometimes for calculating something really quickly I have used the calculator app on my watch.

5. Decline in my smartphone usage.

I know this is not exactly a feature of Android Wear but this is something which comes with it and is including in the whole package. Ever since I started using the LG G watch I have noticed that the time spent on my smartphone has decreased. Many times when I have to ignore certain texts or calls, it’s easier for me to just check them on my watch and leave my phone alone. That way I keep myself informed and I don’t end up pulling out my smartphone for every little thing.

So are android wear watches worth it? Well it really depends on you. While it feels like the future, In my opinion, Android Wear is still in its early stage and although it has some pretty neat features here and there, it really doesn’t feel something which I can’t live without or something which I would miss If left it at home. I definitely feel that eventually wearable tech will become a genuine category like the smartphones did,  but right now it has a long way to go.

Are you using any smart watch right now? What do you feel about Android Wear? Don’t forget to leave your comment down below!